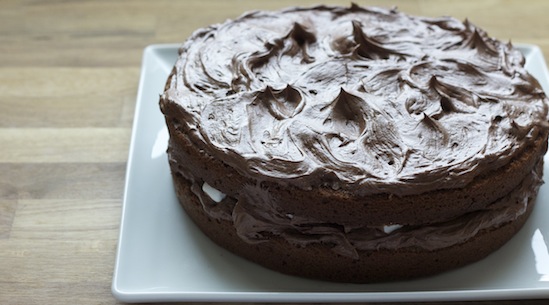 One of the most remarkable elements of the Coca Cake is the frosting. This frosting is rich and chocolaty, sure. But it has the most delightful caramel notes as well. Cooking the frosting ingredients together before mixing in the sugar brings out the caramel that is already present in Coke, making Coke Frosting a one of a kind icing. The chocolate flavors take a back seat to the caramel, and the buttery, intense, rich flavors are perfect for the moist and delicious Coca Cola Cake.
This is also an extremely easy recipe- it really takes just a few minutes on the stove top, then a couple more minutes for mixing in the sugar. Something to keep in mind however is that this frosting will stiffen up pretty quickly. By the time that it is cool, it’s too difficult to work with –  it sets and you can no longer spread it. This Coca Cola Frosting recipe makes enough to fill and frost the two layer Coca Cola cake, but you will need to plan ahead just a bit. Make sure you have this frosting on the stove while the cakes are just about to come out of the oven. That way by the time they cool in their pans for a few minutes, the frosting will be ready to use while both the cakes and the frosting are still warm. This will ensure that you have the best results, and an incredibly delicious cake!

On further note – I like knowing where traditional recipes originate, and I couldn’t find anything on this particular recipe. Southerner’s have been cooking and baking with soft drinks since they were invented, but even

Wikipedia came up short on the origins of this particular use of Coca Cola. I believe (but don’t know for sure) that it predates WWII, but I’d like to know for sure. So if you know when and how Coca Cola cake and frosting was developed, please let us know in the comments below!
Print
Coca Cola Frosting